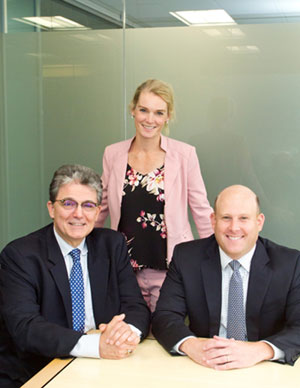 When Sam Apicelli transitioned to the Philadelphia office of Duane Morris as a partner almost 20 years ago, it took him nearly two months to convince the firm’s executive committee that engaging his alma mater, a small law school in rural New England, in pursuit of qualified intellectual property law externs was a worthwhile venture.

Apicelli refused to relent, though, and the relationship eventually forged with Franklin Pierce Law Center (now UNH Law) has paid significant dividends for all parties involved ever since.

Apicelli has first-hand evidence of that essentially down the hall. Fellow alums Christiane Campbell and Jarrad Gunther both spent semesters completing externships at the firm during law school and have since not only been hired by Duane Morris but also joined Apicelli as partners in Philadelphia.

“There is definitely a sense of pride,” Campbell said. “I kind of feel like we beat the odds. We were all hired by an Am Law 100 firm after going to a small law school, and the reason we’re here is because of the Franklin Pierce IP reputation – because the school is known for training really good lawyers.”

Many of whom have walked the halls of Duane Morris since Apicelli first broached the partnership. The firm continues to welcome externs from UNH Law almost every year, and the battle that Apicelli fought early on has given way to something closer to blanket acceptance.

“Right now acceptance for the extern program for students from Franklin Pierce is practically a simple memo and a rubber stamp,” Apicelli quipped. “No questions asked – they just work out.”

That has certainly been the case for Apicelli, Campbell, and Gunther.

The trio all arrived at UNH Law under different circumstances – Apicelli enrolled in law school at the age of 34 after more than a decade as an engineer, engineering manager, and executive director at an electronics company; Campbell spent a year working for a criminal defense attorney in Philadelphia to evaluate her interest in pursuing a career in law; and Gunther spent one year as an engineer before aiming to return to his New Hampshire roots, applying to UNH Law and nowhere else.

While the details of their arrivals varied, though, their experiences once they got to Concord were similar – all three recount a unique hands-on educational experience that prepared them for immediate success in the professional world, fostered by faculty that took a vested interest in each of them as students and individuals.

“I was able to get started and move quickly without having my hand held,” Gunther said of his transition to Duane Morris upon graduation. “You learn the law – the school gives you that framework – but it’s really the practical side of teaching that was most beneficial. That made the biggest difference in me being able to hit the ground running.”

Added Apicelli: “The faculty was very interested in helping the students. [Former professor] Bruce Friedman told us, ‘We want you to learn how to be a practical lawyer who can help people.’ All of that has come to benefit me here in my practice.”

Apicelli was attracted to Franklin Pierce because of its interest in “non-traditional” students, which is how he classified himself after spending a decade in the work force before enrolling. He’d lived outside of London for five years and spent a brief stint in Tokyo for the company he worked for before returning to Harrisburg, Pa. A company shakeup forced him to contemplate his next move, so he made the decision to use his savings and enroll in law school.

“It was easy to be a workaholic,” Apicelli said. “Sitting in class knowing I had spent every dime I had saved to have the luxury of sitting in that seat, it was not hard for me to stay motivated. There was never a point that it wasn’t about ‘what else can I do to take advantage of what I’ve got here?’”

It certainly paid off – Apicelli passed the patent bar during his second year of law school and landed a job in Manchester after graduation. His professional ascent eventually took him to Duane Morris as a partner in 1999, where he is now co-chair of the Patent Preparation and Prosecution Division. His client list extends worldwide, and includes major medical device companies, chemical manufacturers, banking and financial institutions, and a financial transaction card manufacturer.

The first extern from UNH Law that Apicelli worked with was Campbell, who so impressed the staff at the firm that they were asking why she had to go back to law school at all when the semester ended.

“Christie was a home run,” Apicelli said. “When she left people were asking, ‘How is she leaving? I have work for her to do.’”

That success led to Campbell being hired right out of law school in 2005. She has been part of the IP group focused on trademark and brand portfolio management since her arrival, which has allowed her to focus on international law, an area she’s been interested in since she was an undergraduate student.

Her client list includes some major players in global commerce, including Popeye’s Chicken, and her work in brand portfolio management has led her to be involved in India, Mexico, Bangladesh, Pakistan, and China, as well as many other countries in the Middle East, Asia, and Africa.

Gunther took advantage of his opportunity as an extern two years later, as well, and was hired in 2007 after completing law school. He focuses on patent litigation and U.S. Patent Trial and Appeal Board proceedings.

He spent a year after completing his undergraduate studies working for a company in the printing industry before enrolling in law school, and the externship experience he enjoyed at Duane Morris during the first semester of his 3L year led directly to his job offer after graduation.

“It’s a nice feeling, knowing there are individuals here who are familiar with the school you went to – you have that common experience even if you weren’t at the same place at the same time,” Gunther said of the camaraderie between himself, Apicelli and Campbell. “There is sort of that common experience and understanding of where you came from. You start with a certain comfort level.”

The experiences of Apicelli, Campbell, and Gunther are hardly unique – other fellow UNH Law graduates have earned positions at the firm, and many other externs have gone on to find success elsewhere with strong recommendations in their back pockets. Apicelli, Campbell, and Gunther credit the school’s focus on practical training, most notably the legal residency (externship) and clinic programs, for producing students so ready to succeed in the real world.

“Most of the candidates that I see from UNH Law, especially those with clinical experience, are more able to roll up their sleeves and get immersed in the firm right away, above and beyond what we see coming out of our summer program from other schools,” Campbell said. “We take top of the class students from some highly-ranked law schools and they still don’t necessarily have the same practical IP perspective or ability to hit the ground running as UNH Law students. UNH Law students really are an asset.”

Part of that experience is absorbing the wisdom of the three former UNH Law/Franklin Pierce students who rose to the ranks of partner in Philadelphia – wisdom that includes a reminder that the law school they all have in common was well worth the journey. Apicelli, recently clear of the last remaining law school debt he incurred, said he passed a reassuring message on to Amanda Abelmann, one of the most recent UNH Law externs to complete a semester at Duane Morris.

“I just recently paid off my last law school loan, and of all the bills I paid every month, that was the only one I felt really good about,” Apicelli said. “I paid that bill happily, because every time I did it reminded me of the great work I’ve been able to do, the people I’ve been able to help – that’s all a direct result of the money I borrowed. When I paid it off, that was the only time I can remember saying, ‘Well, that was truly worth it.’”

Reprinted with permission from the University of New Hampshire School of Law.